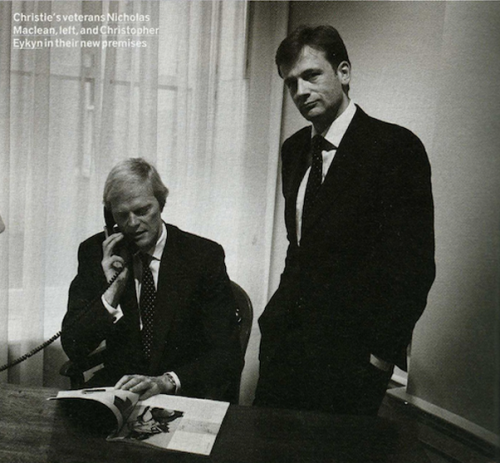 After more than a decade of toiling in the high-stakes arena of Impressionist and modern art for Christie's in London and New York, colleagues Christopher Eykyn and Nicholas Maclean have struck out on their own with a private dealership, Eykyn Maclean.

"We'll be doing some advising, but primarily the business will be brokering pictures," says Maclean. Until December, he was Christie's international director of Impressionist and modern art, while Eykyn was Christie's Imp/mod head in New York.
The duo operate out of a town house at 17 East 76th Street, which they share with London-based dealers Hazlitt Holland-Hibbert. "The feeling for both of us was that it was time to find a slightly more even balance between our work and home lives," Eykyn says. "Plus, we had a desire to work more closely with clients. Given the nature of the auction business, one rarely has time to do that."

Pressed about the competitive nature of their business, not to mention some of their former Christie's colleagues who already deal privately, Eykyn notes, "Nick and I have quite a few clients between us, with a bit more of a focus on the U.S. and Asia."
Although Eykyn, 37, and Maclean, 42, are best known as specialists in the Imp/mod field, they are also comfortable with postwar fare and intend to mind that ground as well. Before leaving Christie's, Eykyn manned the telephone for a client last November at the auction house's postwar and contemporary evening sale, nabbing the top lot, Mark Rothko's 1954 Homage to Matisse for a record $22.4 million. Maclean on another phone line, was an underbidder for the Rothko as well as for the Roy Lichtenstein Pop masterwork In the Car, which hit a record $16.3 million.

The partners, working without outside financial backing, are banking on a streamlined business model to succeed. "With limited costs," says Eykyn, "we don't have to sell a huge number of paintings to create a viable business."