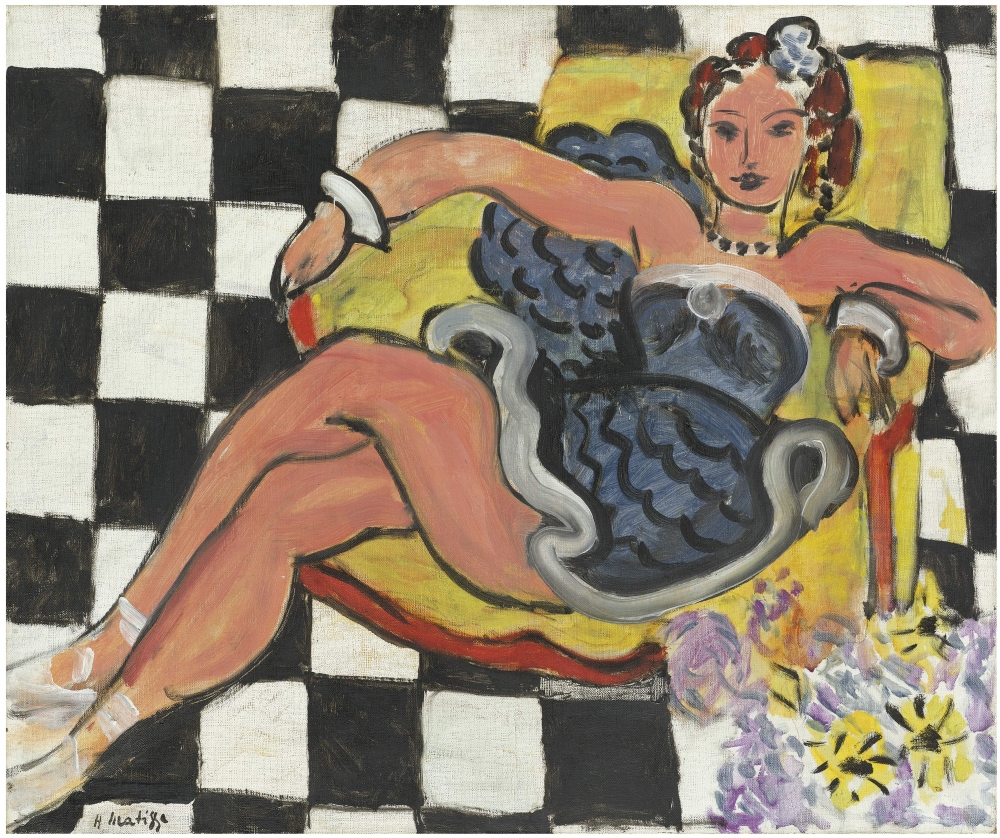 Be careful or you'll miss the show of choice paintings, drawings, prints and sculpture by Henri Matisse (1869-1954) that can be found right now at Eykyn Maclean on East 67th Street in Manhattan. A lot is going on during the pre-Christmas season, and the exhibition, “Matisse and the Model,” only remains on view through Dec. 10, 2011.

About three quarters of the works are from private collections, and they are as stunning as the museum loans that round out this memorable show. It proves, like the earlier exhibition, “In Giacometti’s Studio,” that the gallery’s two owners, Christopher Eykyn and Nicholas Maclean -- former co-heads of Impressionist and Modern Art at Christie’s and still big players at the art auctions -- know which private collections to raid for exciting art.

Curator Ann Dumas allows the viewer to see Matisse’s triumphs, but also his struggles, through his use of models, including himself, from about 1900 to his death in 1954. Self-Portrait, a little miracle in black ink from 1935 that stretches only a few inches in height and width, shows the artist looking steely-eyed and critical -- which he certainly was.

Matisse had a symbiotic relationship with his models, which Dumas affirms when she cites Matisse’s famous words to open her catalogue essay: “I depend entirely on the model.”

Matisse, for all his wild youth, was a thoroughly proper gentleman, entirely polite, hardworking and regular in his ways, and not a satyr, despite an oeuvre filled with sensuality. This sense of allure, held at a distance through an almost classical dedication to structure, form, line and color, can be easily imagined in his pictures of women.

The sessions with Matisse and his models -- first his wife and daughter, then a series of professionals -- were intense, requiring long sittings under grueling conditions while the artist worked things out. These kinds of difficulties seem to provide a subtext for the 1921 Studio Interior, a seductively lush image of the artist and an exhausted model.

Matisse struggled through a process of symbiosis, absorbing and balancing the sensuous with the technical, expressing his deepest feelings while finding new ways to put them on canvas, and he was often overcome with emotion. Matisse would sometimes end up fighting with his wife when she posed for him, and he eventually suffered several nervous breakdowns.

Nude with a Blue Cushion beside a Fireplace, a lithograph from 1925, seems deceptively straightforward, as if achieved without difficulty -- not always the impression given by Matisse works. The nude is absorbed by the setting and merges with it, a fact which diminishes the sexuality of the figure yet makes the entire composition more voluptuous. What this may have cost Matisse is never hinted at.

Matisse may have sought “an art of balance, of purity and severity, devoid of troubling or depressing subject matter . . . something like a good armchair," but getting there wasn't necessarily easy.

In a drawing like his charcoal Woman Seated in a Taffeta Dress from 1937, the smudges and pentimenti are a visible record of the vibrations of the artist's nervous system as much as a physical rendering of another’s form. It’s Matisse at work, model and maker merged.

A pair of drawings executed only a month apart, yet radically different, show Matisse working in series, nudging himself in different directions. His charcoal Reclining Nude of June 1938 is all curves, while the same model in the same pose in July is all jutting angles. To see these two on the same wall is a boon to anyone interested in Matisse and how he worked, gaining his self-assured technical mastery.

Once told by one of his teachers, William Adolphe Bouguereau, that he would never be able to draw, Matisse spent much of his life turning himself into a master draughtsman on his own terms, as his 1935 Self-Portrait (and any number of later works) proves. In the current show, his Portrait of Lydia, another dazzling ink on paper from 1946, is as economical as it is sophisticated.

By 1917, when Matisse was spending his winters in Nice, he knew he needed young female models but also warmth, color and designs of all kinds to keep painting. Coming from a family of weavers, fabrics appealed to him as much as flowers. And he indulged himself in yards of exotic cloth and fancy clothing that appear and reappear in his work, like the North African pierced hanging or Haiti, which was owned by Matisse himself and is included in the exhibition.

In the oil Woman in a Flowered Hat (Antoinette) (1919), Matisse’s model wears a floral-printed blouse with delicate white trim and an extravagant hat with huge blooms. Her steady gaze almost dares the viewer to come near, yet the flowers attract the eyes as if they were bees.

The paintings here, like this one, are knockouts, perhaps none quite as remarkable as Dancer in an Arm-Chair, Checker-Board Background, from 1942.  An edging in white marks the hem of her very short dress, heightening the curves of the blue ruffles and connecting it with the other white areas of the painting. The chair seems to levitate against the background, and a bunch of flowers in the right foreground has no visible means of support. The long, sexy, crossed legs of the model, distancing the viewer from the subject, are emphasized as she relaxes, smiling cheerfully.  The work is a wonderful confection that invites looking by drawing the viewer in, yet keeps him or her slightly removed. It is so brilliantly constructed that the artifice disappears in delight -- exactly what Matisse had in mind.

N.F. KARLINS is a New York art historian and critic.

View on Artnet.com
Back To Top